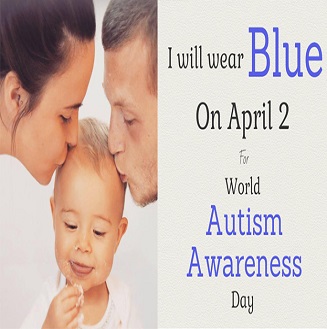 The theme for this year is ‘Inclusion and Neurodiversity’

Boys are 5 times more likely to get autism than girls

1 in 66 children in India has autism The World Autism Awareness Day 2016 is the eighth time the day is celebrated to spread awareness about the developmental disorder that has no medical diagnosis nor does it have a cure. Autism is a neurological disorder that affects a child within the first three years of its life.

The UN Secretary-General Ban Ki-moon’s message, “On this World Autism Awareness Day, I call for advancing the rights of individuals with autism and ensuring their full participation and inclusion as valued members of our diverse human family who can contribute to a future of dignity and opportunity for all.”

The Theme for 2016: Inclusion and Neurodiversity

‘Every autistic child has untapped skills to be honed by an inclusive society.’

People with autism should be assured of the following in order to lead a stigma-free life.

1. Quality Education: Special instructors may be required for people with autism.

2. Right to Jobs and Economic Independence: Self-reliance will boost confidence and aid in better acceptance within society.

3. Removal of Stigma: The stigma associated with autism should be removed to create a uniform platform for growth.

Autism is a Spectrum Disease

Autism is called a spectrum disease as the symptoms associated with this disease can range from being mild developmental delays to complex personality traits. A person with autism does not develop skills age appropriately. For example, a child may be 4 years of age, but may show language ability of a 2-year-old, and fine motor skills of a 6-year-old.

The neurological condition leads to varying effects, which need to be understood to effectively support and include the individual in the society.

Brain scans of children with autism have shown a change in the structure of the brain when compared with controls.

Autism affects the child’s ability in the areas of

Autistic children may seem perfectly happy playing alone with their toys, but may turn extremely agitated amongst company, wrecking furniture or moving away into isolation. They show an inbuilt inhibition towards communication and hate social interactions.

Autism is difficult to detect early on in life, but these signs are generally used to recognize developmental delays.

Children of 4 Years or Older:

These symptoms are usually seen in autistic children, but these symptoms alone cannot be treated as sole signs of autism, as some characteristic may be exhibited by children at the right developmental stage.

This World Autism Awareness Day 2016, people all over the world are requested to turn their lights blue to bring awareness to this developmental disorder. When people realize that children with autism react in a specific way as a result of symptoms of the condition, they will be more patient and empathetic towards the children. Managing autism is about sharpening skill areas that the child has a natural inclination towards.

In India, there has been concerted efforts to bring greater awareness towards this condition with a movie like ‘Taare Zameen Par’ highlighting the plight of these children but bringing to the fore their competitive intellectual ability.